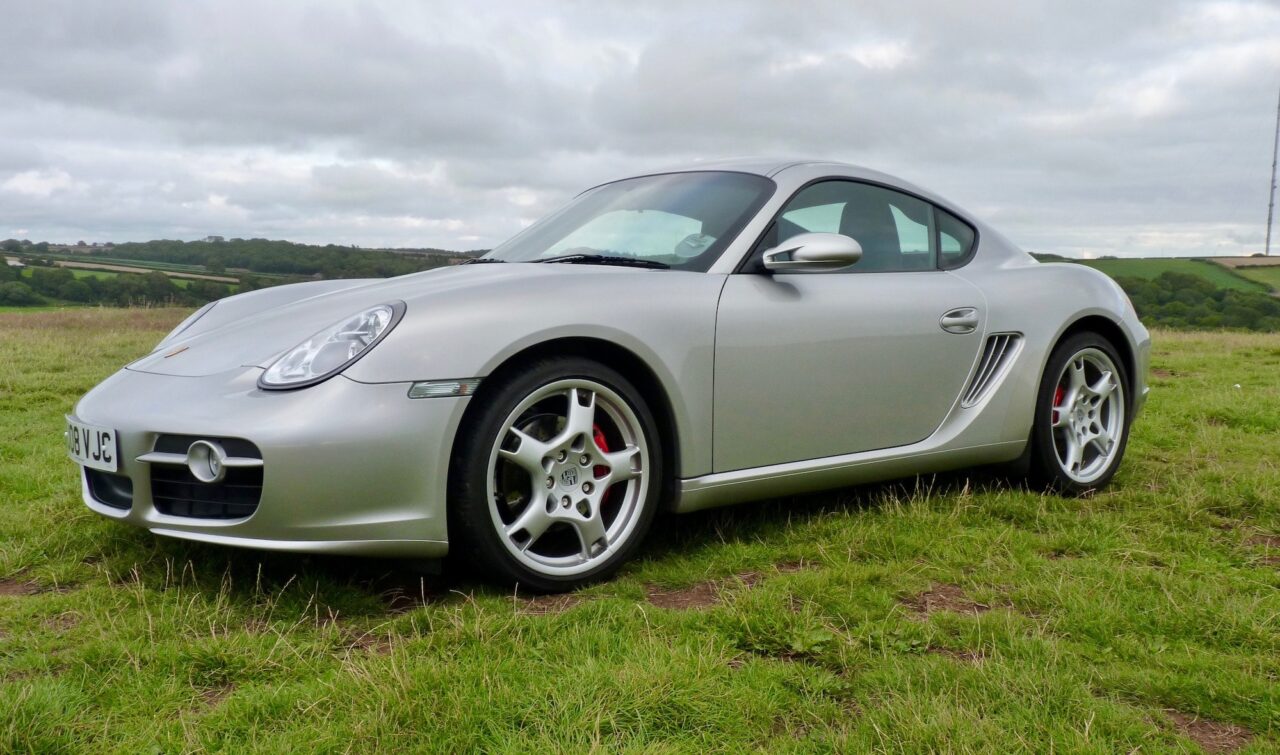 Pocket Rocket are to pleased to offer for sale a hand selected 2008 Porsche (987) Cayman S.

This Porsche (987) Cayman S is an engaging sports coupe with superb handling, which features a smart factory colour scheme and low mileage from new. It is powered by a mid-mounted naturally aspirated 3.4-litre flat-six, producing 291bhp, with rear-wheel drive via the six-speed manual transmission. The odometer shows just 24,373 miles from new.

First registered in March 2008, this Cayman S was specified with Arctic Silver paintwork over a dark blue interior, and includes a selection of desirable factory options, including the sought-after Sport Chrono package, rear parking sensors and Carrera S alloy wheels. Its log book lists just one prior keeper, its previous owner acquired it approximately 11 years ago.

Today, the bodywork and paint presents very well, with no previous accident damage, and with some sections having been resprayed only to repair minor scuffs and scratches. The light lenses are bright, clear and free of scratches and hazing, and the rubber seals are all in good shape. This Cayman S was also fitted with an optional rear wiper. It rides on a set of 19-inch Carrera S ‘lobster claw’ alloys, which present very well, with just one scuff on the nearside front wheel.

Looking to the interior, the seats, gear knob, gear gaiter, handbrake lever and steering wheel are all clad in blue leather, which is complemented by a dark blue dashboard and carpeting – providing an attractive contrast with the exterior paintwork. The manually-adjustable seats have been well cared-for and show few signs of wear, with only very minor imperfections on the outside bolster of the driver’s seat.

Elsewhere in the cabin, the trim is in equally good condition. Optional equipment includes rear parking sensors, air-conditioning, heated seats and the Porsche CDR-24 audio system. All of the cabin’s buttons and switches are in good condition and work as they should, with the air-conditioning system having been re-gassed in May 2019.

Mechanically, this 987 is in good health, the car’s last scheduled maintenance was a major service including renewal of the brake fluid, which was carried out at 24,091 miles by Welsh Specialist Cars in Cardiff. Prior to this, Porsche Cardiff performed minor services with fresh brake fluid in October 2017 at 21,885 miles and in June 2015 at 19,878 miles – with a new auxiliary drive belt fitted during the latter.

Its last annual MOT test was conducted on 6 April 2019 at 23,422 miles, where it received a first-time pass, with the only one note about the presence of factory-fitted under-trays. Due to recent restrictions surround garage openings, the current MOT was extended, with its next test being due no later than 22 October 2020.

The wheels are shod with Bridgestone Potenza RE050A tyres in size 235/35 ZR19 on the front and 265/35 ZR19 to the rear. All four are described as being in good condition and with approximately 6mm of tread remaining.

Accompanying the car are all of its original handbooks and accessories, including the driver’s manual and user guide, plus the stamped service record.

This Porsche (987) Cayman S is a fine example of a sought-after performance car, with the perennially desirable combination of a flat-six that loves to rev with a slick six-speed manual transmission. With just two owners and low mileage from new, it has been well cared-for over the years. This is a great opportunity to acquire a very smart Cayman S, which is sure to delight on your favourite B-road.