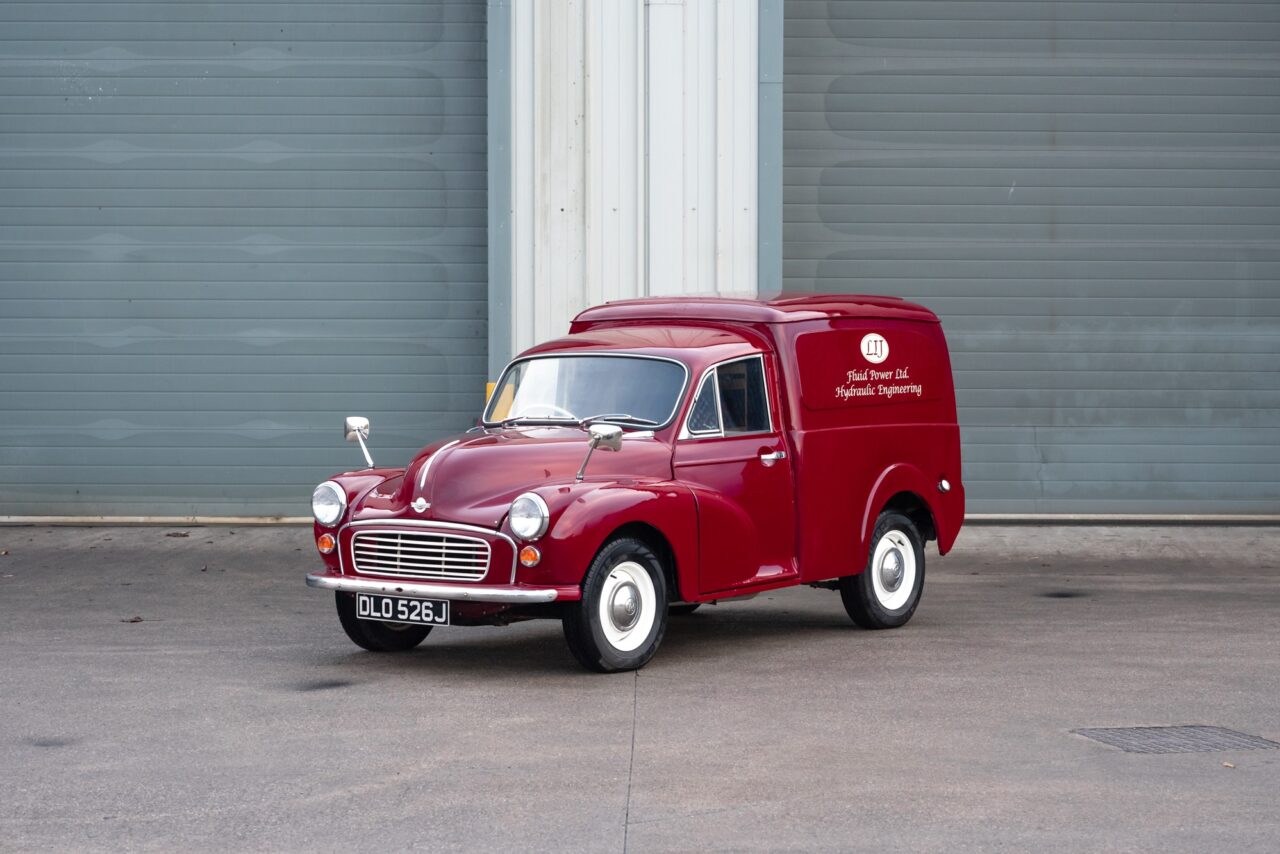 Pocket Rocket are to pleased to offer for sale a hand selected 1971 Morris Minor 1000 Light Van.

This Morris Minor 1000 is a smartly presented and charming example of the marque’s light van, benefiting from a previous restoration. Under the bonnet is an inline-four engine coupled to a four-speed manual gearbox. It was originally fitted with a 1098cc engine (denoted by the 10V code on the identity plate), and it is believed to retain this motor; however, the DVLA records show the engine capacity as 1999cc, which is assumed to be a typing error. The odometer reads 50,480 miles.

Initially registered on 19 April 1971, this Minor is a UK-market model. At the start of the 1990s it was finished in beige, but the colour is recorded as changing to red in 1993. The last vendor had owned the van for the last two years. Just prior to his ownership, in 2017 the van was used for an eye-catching Loteri Cymru photoshoot, being tied to 39 helium-filled balloons to promote the nation’s first-ever lottery draw.

Wearing glossy red paint throughout, the van is in good condition, with the finish retaining a smart and even appearance. Period touches such as the Morris badging, chrome headlight surrounds, door strips, and front bumper remain in good order, with only minor marks but no damage. The load bay also presents well, with only slight wear from sparing use. The vehicle was restored prior to the last vendors ownership, which accounts for the good condition of its body panels and paintwork today. There are some very minor spot blemishes on the steel wheels, but generally they are in great shape.

Inside, the Morris’s spartan interior is brightened by the re-trimmed front seats, accented by dark red piping. The interior retains many of its original features and switchgear, while the thin-rimmed steering wheel and gear knob present very well. The load bay’s practicality is augmented with the addition of a basic wooden storage frame, which is ideal for retaining small items, cans and oil containers.

This delightful van has been in storage and known to be part of the last 2 previous owners private collection. Hence why it has only covered some 80 miles in the last 2yrs time. The last service was carried out in February 2020, when the braking system was also re-commissioned with the removal of all brake shoes which were decontaminated and refitted. All cylinders were stripped and rebuilt.

The most recent MOT test was on 20 May 2020 at 50,474 miles, which resulted in a first-time pass with no advisories, highlighting the impressive overall condition of the van. Due to its age, it is understood to be exempt from mandatory annual MOT testing. It rides on a set of four matching tyres, which all appear to have ample tread remaining.

This Morris Minor 1000 Light Van is an authentic and handsome classic commercial vehicle. In very good cosmetic condition and with simple mechanics, it is ready to be put to use as a fun but reliable work van. Alternatively, it could be carefully stored in a collection, ready for fair weather days or to exhibit at classic car shows.