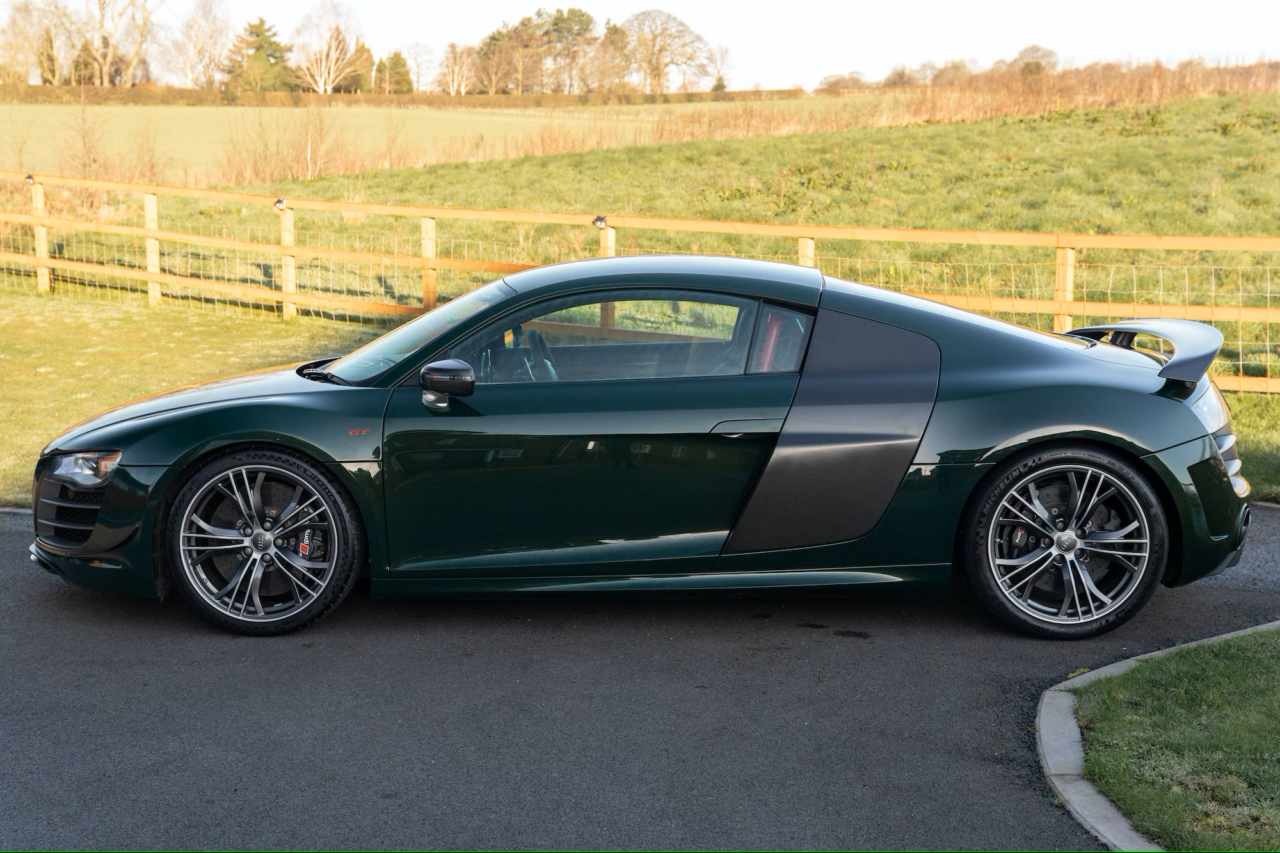 Pocket Rocket are to pleased to offer for sale a hand selected 2011 Audi R8 GT.

This Audi R8 GT is a handsome example of Audi’s lightweight former flagship model and is finished in a wonderful shade of British Racing Green. This example is believed to be one of only 33 original UK-supplied cars, and is now thought to be one of only 25 remaining in the country. The Audi R8 GT is capable of dispatching the 0-62mph sprint in a mere 3.6 seconds, and will continue accelerating up to a top speed of 199mph.

It is powered by a lauded 5.2-litre V10 engine producing 552bhp and 398lb-ft of torque, which is sent to all four wheels via a robotised manual six-speed R-Tronic transmission. It is finished in handsome British Racing Green paintwork over a grey Alcantara-trimmed interior with red accent stitching, seatbelts, and dials, which match the red ‘GT’ badging on the car’s front wings. This car also benefits from having Miltek’s upgraded exhaust system made specifically for the Audi R8 GT.

The Audi R8 GT features various weight-saving measures which include lightweight bucket seats, polycarbonate and extra-thin glass, and various carbon-fibre, magnesium, and lightweight aluminium body components. It also features a lighter braking system, battery, air intakes, and removal of the engine compartment sound deadening. This provides a weight saving of 100kg below the standard car, and an increased power-to-weight from 301bhp to 362bhp-per-tonne. This example is also fitted with the ‘Race Pack’, an option which was only available on the coupe and added a half roll cage, Schroth harnesses, a fire extinguisher in a leather-trimmed cover, internal and external kill switches, a race mode ECU and a race mode centre console indicator. Of the 33 UK cars it is believed only two feature this option.

This R8 GT’s latest service was carried out in September 2020 at 47,742 miles by C.G. Cars in Leicester. The work comprised of an engine oil and filter change, along with the replacement of the spark plugs.

Prior to this, the car was serviced in October 2018 at 45,062 miles by C.G.Cars Leicester which was a routine oil service, and in August 2016 at 33,889 miles by QRSPORT in Chester which comprised of a routine maintenance service.

The ‘GT’ model of the Audi R8 adds a dose of rarity into the equation and turns up the dial on driver involvement and excitement, while losing none of the standard car’s inherent usability.  It appeals as a track toy, but it would equally make an excellent companion for spirited road drives, or an ideal car for longer continental road trips.

‘What makes this model so remarkable is its everyday usability, and the way it feels so special at the same time. While the GT hasn’t lost sight of this philosophy, it’s sharpened the dynamics and upped the pace – and is the king of the R8 range’