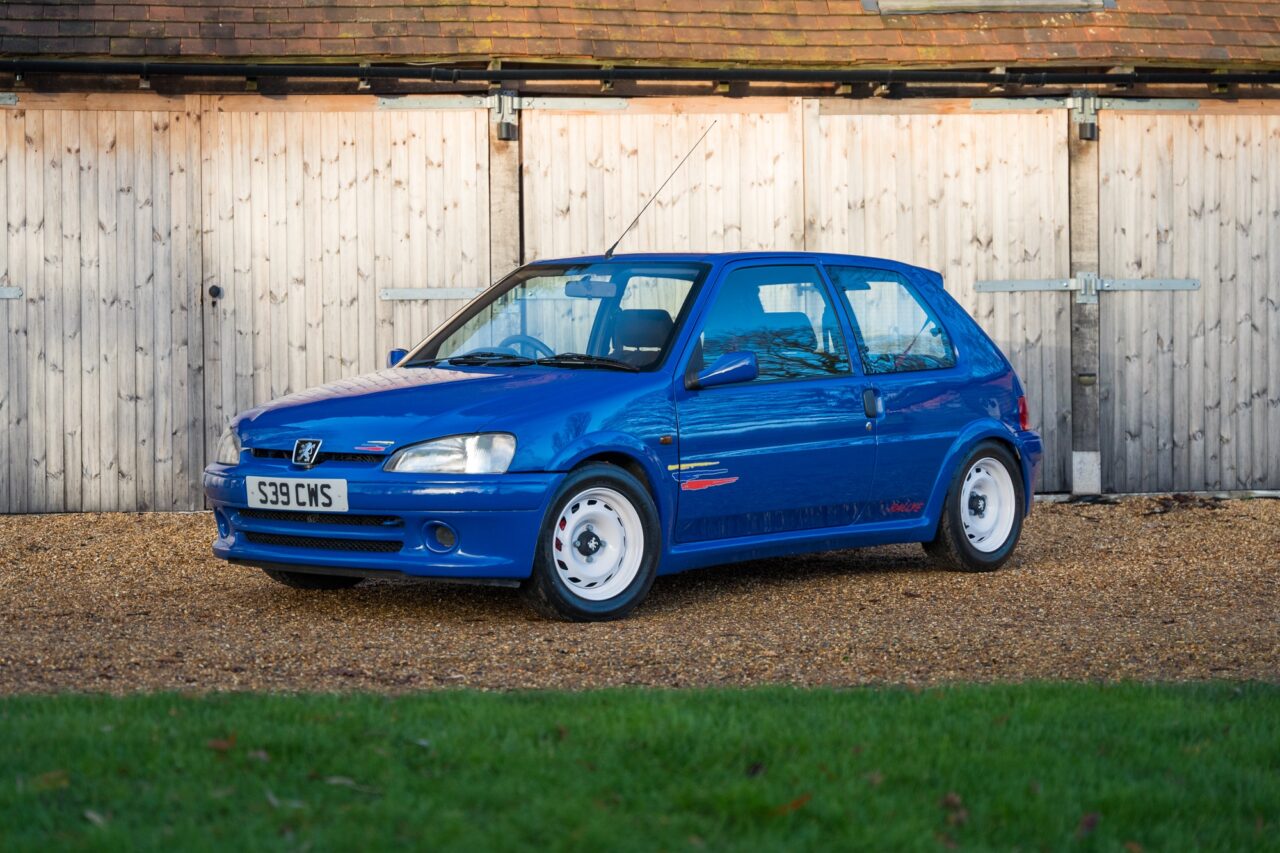 Pocket Rocket are to pleased to offer for sale a hand selected 1996 Peugeot 106 Rallye Series 2.

This Peugeot 106 Rallye is a fully restored example of a lightweight, exciting hot hatch, boasting a pared-back driving experience that is almost impossible to recreate from the current crop of affordable performance cars. As a ‘Phase 2’ model, under the bonnet is a 103bhp 1.6-litre 8-valve inline-four, which was rebuilt this year, driving the front wheels through a five-speed manual transmission.

First registered in August 1998, this 106 Rallye was acquired by its most recent private owner in October 2018. It was subsequently treated to a comprehensive rotisserie-style restoration to eliminate all rust, and given a total mechanical overhaul. Since then, it has been carefully stored and used on fair weather weekends by ourselves.

The paint though is in generally poor  condition, its Indigo Blue paintwork having been applied to thickly and its suffering from overspray in a number of places. It rides on the correct 14-inch white powder-coated steel wheels, which are in great shape.

The photos in the gallery reveal the extent of the strip down and rebuild, and during the restoration the car had the inner arches and chassis legs replaced, with all welding work carried out by a professional. The underside was sandblasted, sealed, and repainted in Indigo Blue to match the rest of the shell. It was rounded off with a fresh set of Rallye decals.

Inside, the upholstery is believed to be all original and still presents in excellent condition. There is some very slight fading and a few marks on the cloth front seats panels, but the cabin still looks very smart. There are no cracks in the dashboard or door panel trims, and the blue carpets and floor mats are in good order. The gear knob is original, while the steering wheel has been renewed with a leather-trimmed item.

The engine was rebuilt and serviced earlier in 2020, naturally including a new cam belt and auxiliary belts, as well as replacement water pump. The camshaft and pulleys were upgraded, a 4-2-1 exhaust manifold was installed, along with a Pugsport stainless steel exhaust system, and a K&N induction kit was also added. The five-speed Rallye gearbox was overhauled at the same time.

The other mechanical components were also given similar treatment, with new ventilated and grooved brake discs, new copper brake lines, handbrake cables, and new callipers. The shock absorbers and springs were uprated with a 40mm drop in ride height, while the rear axle was inspected and repainted. The car also received new wheel bearings, lower arms, hubs and had all bushings replaced.

The wheels are fitted with grippy Nankang Sportnex NS-2R tyres on all four corners, which are still in excellent condition with ample tread. Accompanying the car is a large history file, and some original books.

This Peugeot 106 Rallye is a no-frills homologation special, with an addictive driving experience that adds up to much more than the sum of its parts. Tipping the scales at just 865kg, it is a featherweight flyer in the truest sense of the term, delivering immediate responses that make more powerful but much heavier cars seem somewhat redundant. Given its recently restored condition, this Rallye would be a credit to any collection of modern classics, and is of course also a superb driver’s car to take out and enjoy whenever the mood takes you.