It was never my intention to write a specific car review / appraisal of a Pocket Rocket stock car – but its not everyday that you get to experience a Subaru Cosworth Impreza STI CS400, such is the rarity.

What we have is the the third generation of a Subaru Impreza, namely a WRX STI. This being one of many special editions had a limited production run of 75 cars (including 2 prototypes). In typical Subaru fashion, all latest and maddest special editions found their way into the hands of the highly capable company – Prodrive. Best known for its 19yr association with Subaru. Although it is worthy of note that around half of all their 871 rally starts were made with other manufacturers.

The conventional and highly successful partnership of using Prodive modifications was thrown out of the window and the Subaru Impreza WRX STI was given to Cosworth.  This car is actually the first performance special that Cosworth has developed ‘solo’ since the whale-tail 1996 Ford Escort RS that bore the company’s name.

In addition the following aesthetic changes were made: the upper mesh grille with piano black finish on the top frame, modified front bumper with “Cosworth” emblem on the lower mesh grille, 18-inch alloy wheels, lip front spoiler, rear waist spoiler, Recaro leather seats with “Cosworth” label, piano black center console panel, and “Cosworth”-badged floor mats all added to the extra visual appeal this car exploited (although subjective) over and above what was, in its third generation, a Subaru Impreza shape and profile that had not delivered for the purest.

The on the road experience is dominated by the powertrain and especially the comedy turbo lag.  All of which are exactly the type of traits that gives this car the type of personality that make it, in my mind, fully addictive! The engine churns slowly at first and then booms into a heavy idle. The sound is deep, powerful, the sort of noise that isn’t piercingly loud but jangles your bones. I’d expected a hellishly hard ride, but although the CS400 is firm at lower speeds, it doesn’t take long before the Bilstein dampers start to find their range even on our local, jagged roads.

Compared next to Pocket Rockets Impreza WRX STI Spec D ( 1 of only 300 ) the powertrain can have a real off-boost lethargy, exaggerated by the light, long travel nature of the throttle pedal. Some of this inherent lack of feel can be squashed by engaging the sport sharp mode on the Intelligent-Drive (SI-Drive) system. Once the turbo has been woken up it chomps through each gear with a delicious roar overlaid with the hissing of the big cold-air intake system and the whistle and chirrups of the turbocharger plumbing – absolutely gloriously. 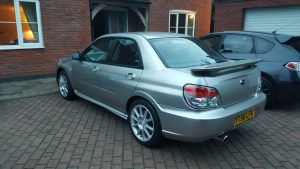 Of all the cars I have access to on a daily basis, I yearn for the CS400. Its appeal for me is dominated by its rarity, the partnership with Cosworth and the overriding laugh out loud driving experience. I find myself daydreaming about taking it on a road trip to the Cosworth headquarters or maybe onto the drifting circuit at Outlon Park.

Through some overseas contacts Pocket Rocket has, it looks very much like this car is destined for exportation but I sincerely hope that it finds a home within our shores. Keep an eye out on our current stock http://pocketrocketsales.co.uk/cars/  to be sure to capture when the car is advertised for sale. I encourage Pocket Rocket customers to come and test drive the car – be warned though, the experience will leave you yearning for more…