BMW has released official details and pictures of the upcoming 6th generation M5 ahead of its UK arrival due in 2018.

Details have emerged that the latest M5 will offer 592bhp from its 4.4-litre twin turbo V8 and generate 553 lb-ft of torque. Key to its weight loss from its predecessor is the addition of the new carbon roof; the first to ever be installed on an M5. Other distinctive M features include: 20″ M light alloy wheels, M Twin Tailpipes, a striking M kidney grille with High-gloss black double slats and M mirror caps with aerodynamic winglet. The latest M5 will also now finally feature four-wheel drive, a move not seen previously from M-car models (not including SUVs). This will be connected to a torque converter automatic gearbox, in place of the MDCT twin-clutch found in the previous M5, apparently improving the ‘everyday refinement of the car’. 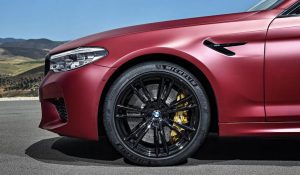 These new additions result in a blisteringly fast (claimed) 0-62mph time of 3.4 secon
ds and a 0-124mph time of 11.1 seconds. The M5 isn’t short of equipment either, the usual manual control option via the gear selector and paddles and a variety of driving modes make a continued appearance, although there will also be the option to customise and store various setup options that can be easily accessed via the steering wheel. A red starter button dominates the cockpit, as well as a heads up display and a variety of standard and additional options. 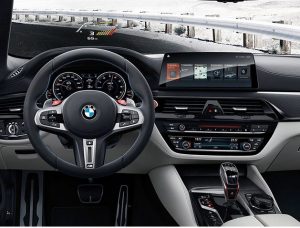 The M specific BMW Head-Up Display and improved Speed Limit Information, as well as the optional Driving Assistant Plus with Active Cruise Control with Stop&Go function, all exhibit the technological prowess of the new BMW M5.

In the name of Top Tumps lets look at the comparison between its nearest rival the Mercedes AMG E63 S.

Which would you choose?